Last week, Brazilian mining activities and their socio-environmental impacts were in the spotlight at the International Seminar on Mining, Transnational Companies and Traditional Peoples and Communities. Speakers at the seminar warned about the environmental impact of Canadian company Belo Sun’s gold mining project Volta Grande do Xingu. The proposed project would be in Altamira, in the State of Pará, and would generate more than 35 million cubic meters of residues. According to environmentalists and representatives of public agencies present at the seminar, this is a high-risk project and didn’t have preliminary studies on the impacts to local Indigenous communities.

The virtual event was organized by International Rivers in partnership with the Amazon Human Rights Clinic (CIDHA/UFPA), the Public Defender’s Office of the State of Pará, the Xingu Vivo Movement, the Instituto Socioambiental (ISA), and the Inter-American Association for the Defense of the Environment (AIDA).

Belo Sun is an unfeasible project

The Volta Grande do Xingu Project is led by the Canadian company Belo Sun Mining Corp in the municipality of Altamira, State of Pará. It would be the largest open-pit gold mining project in Brazil, and located right next to the Xingu River. The river is  known for its biodiversity and is home to several Indigenous and traditional communities, who have already been impacted by the construction of the Belo Monte Dam. (link to our Belo Monte page).

The  open-pit gold mine would use cyanide, an extremely toxic substance, which presents a high risk of contamination of the river and water quality.

Since its inception in 2013, the project has faced several lawsuits by the Federal Public Ministry, the State Public Ministry, the State Public Defender’s Office, and the Union Public Defender’s Office. They point out several flaws in the licensing process and in the technical studies of the project and ask for the cancellation of already granted licenses and suspension of the licensing process. One of the lawsuits resulted in a still valid court decision that suspended  the Installation License (LI)

“Nobody remembers Rio Doce, which was sweet, and turned dead”

Amanda Reis, from the Federal University of Pará, opened the event by talking about the context of the harmful extractivist model encouraged by the Brazilian government.

“As it is well known, the Amazon region still has a development model of occupation that was projected in the 70’s, based on illegal activities and mining. This picture has not changed, but activities have increased”, said Reis, who recalled that the state of Pará in Brazil is the largest and most diversified mineral province in the country. 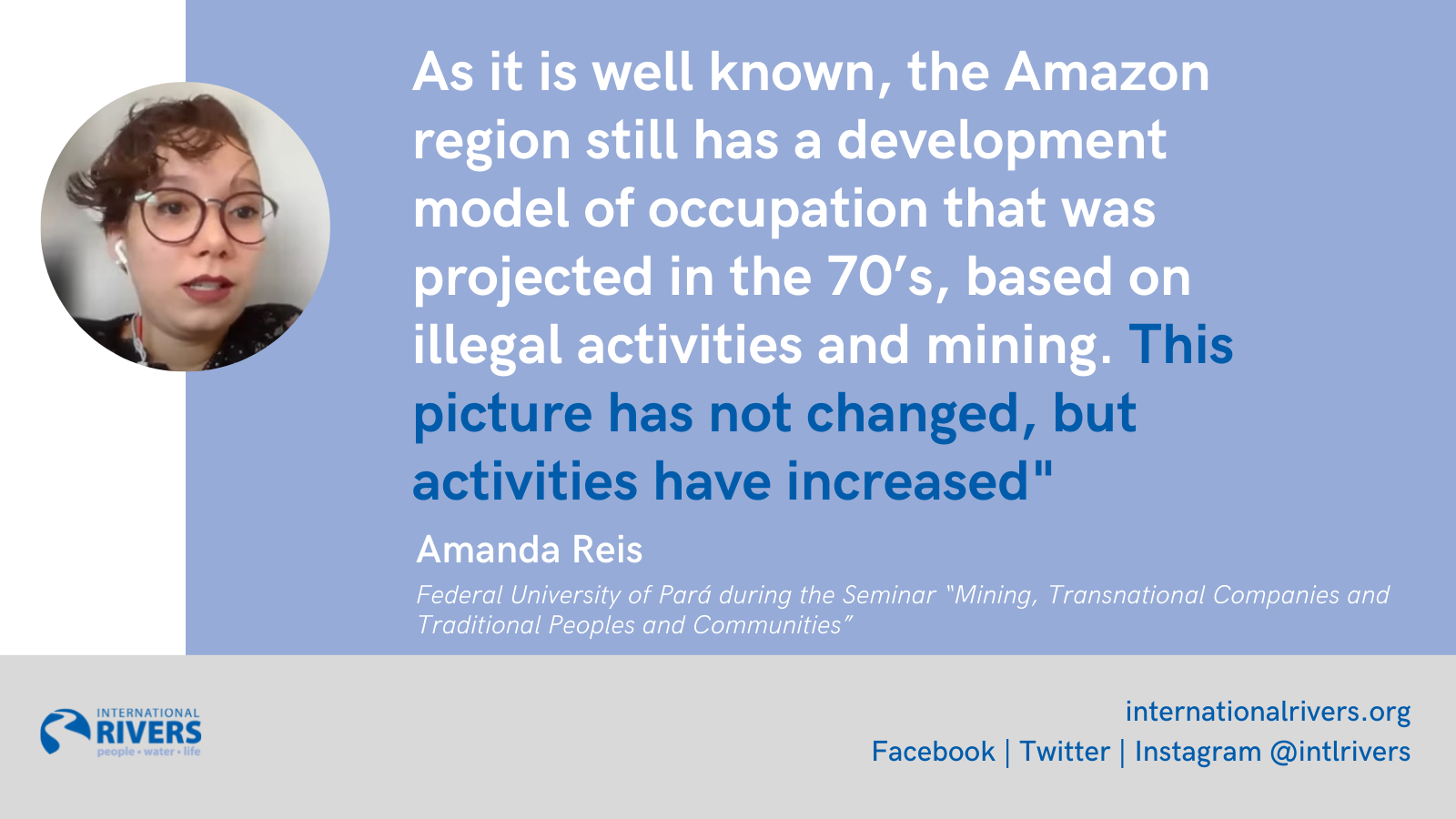 The first panel, mediated by Andreia Barreto, a public defender from the Public Defender’s Office of the State of Pará, presented more details about the Belo Sun project.

For Carolina Reis, from the Instituto Socioambiental, “Belo Sun is unfeasible”.

“If Belo Sun is implemented, it will be the largest open-pit mine in Brazil (…). To extract  gold from an area the size of nearly 1400 soccer fields, Belo Sun will use cyanide, a super toxic substance (…) Belo Sun’s own environmental impact study considers the high risk of a tailings dam failure and if it breaks, it will be potentially more dangerous than the mud we saw in Mariana. “, explains Reis. 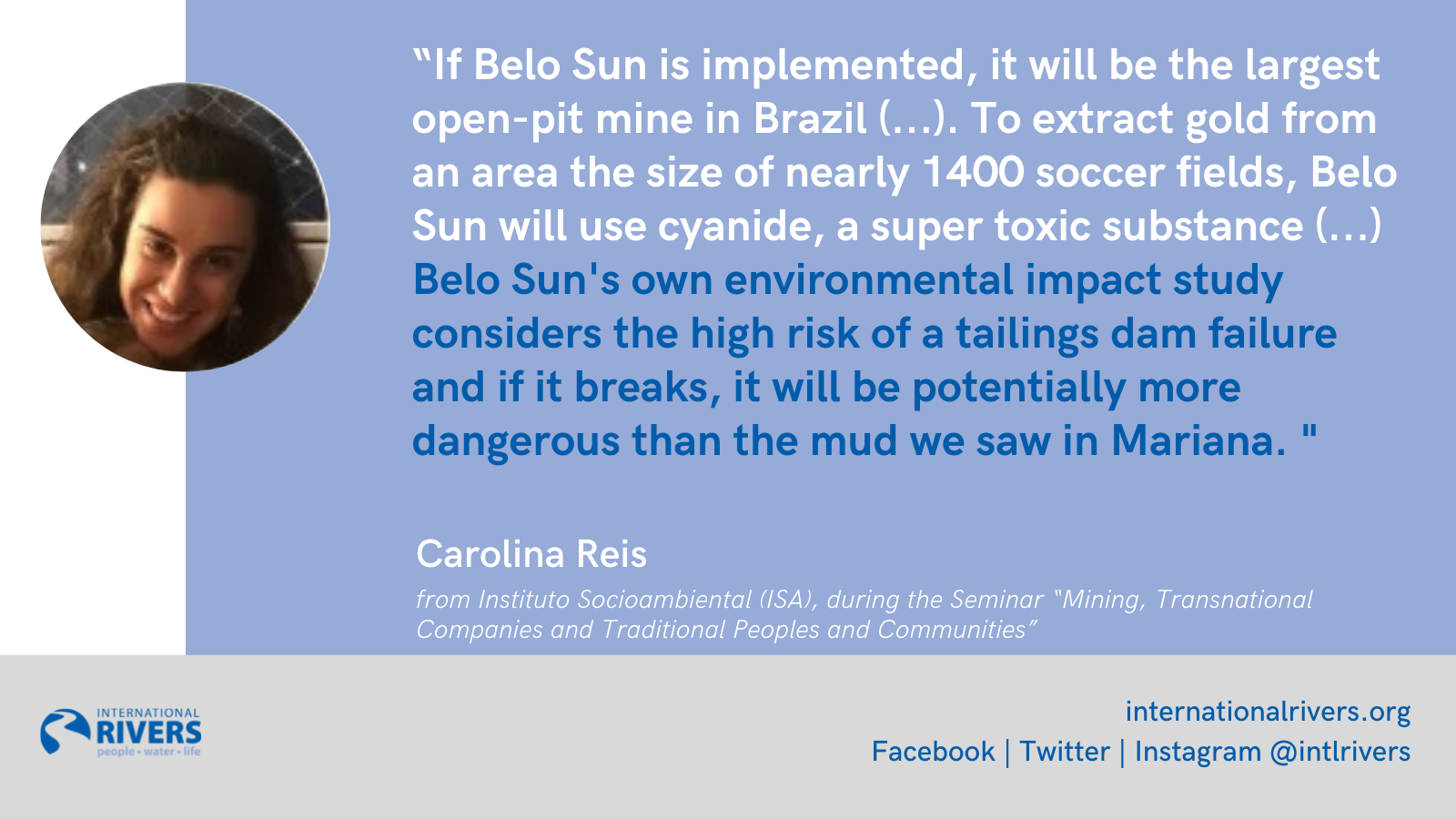 Reis expressed her concern about contamination by the Esteril, blocks of rock removed to dig craters and reach the gold veins. To produce more than 150 tons of gold, Belo Sun will remove more than 25 million cubic meters of earth, which will be stacked up in two piles of sterile waste – equivalent to a 50-story building, just 1.5 km from the Xingu river. The Estéril components are chemically active, and despite a drainage system, they will be active for hundreds of years.

What does the State say?

Bringing the perspective of the State, the session also included Gerson Paes, Coordinator of the Mining office of the Environmental Licensing Directorate of SEMAS-PA (the state environmental agency). Mr. Paes explained that, following the Brazilian licensing process, the licensing for the Belo Sun case is subject to the state’s jurisdiction, and that the case of Belo Sun was analyzed by a multidisciplinary team that attested to the project’s feasibility. Paes stated that he defends “mining as long as it is sustainable”, only if the three licensing segments are covered – social, economic, and environmental. He also spoke about the importance of mining activity for the country’s development, stating that “evidently every mining and dam undertaking poses risks”. Paes recalled that the licensing process is suspended, for now, waiting for FUNAI’s indigenous studies.

The event was also attended by Regis Fontana, from Ibama’s Licensing Board (Ibama is the federal environmental agency). Fontana explained that, in the case of hydrodam monitoring at the Belo Monte UHE, Ibama identified that the environmental impacts arising from the plant’s operation and the water volumes practiced were greater than predicted, a warning for the region and infrastructure projects. He also  explained that in the case of the Volta Grande Project (Belo Sun), despite not being under federal jurisdiction, IBAMA states that until a comprehensive impact assessment of the program is conducted, the project cannot be started. 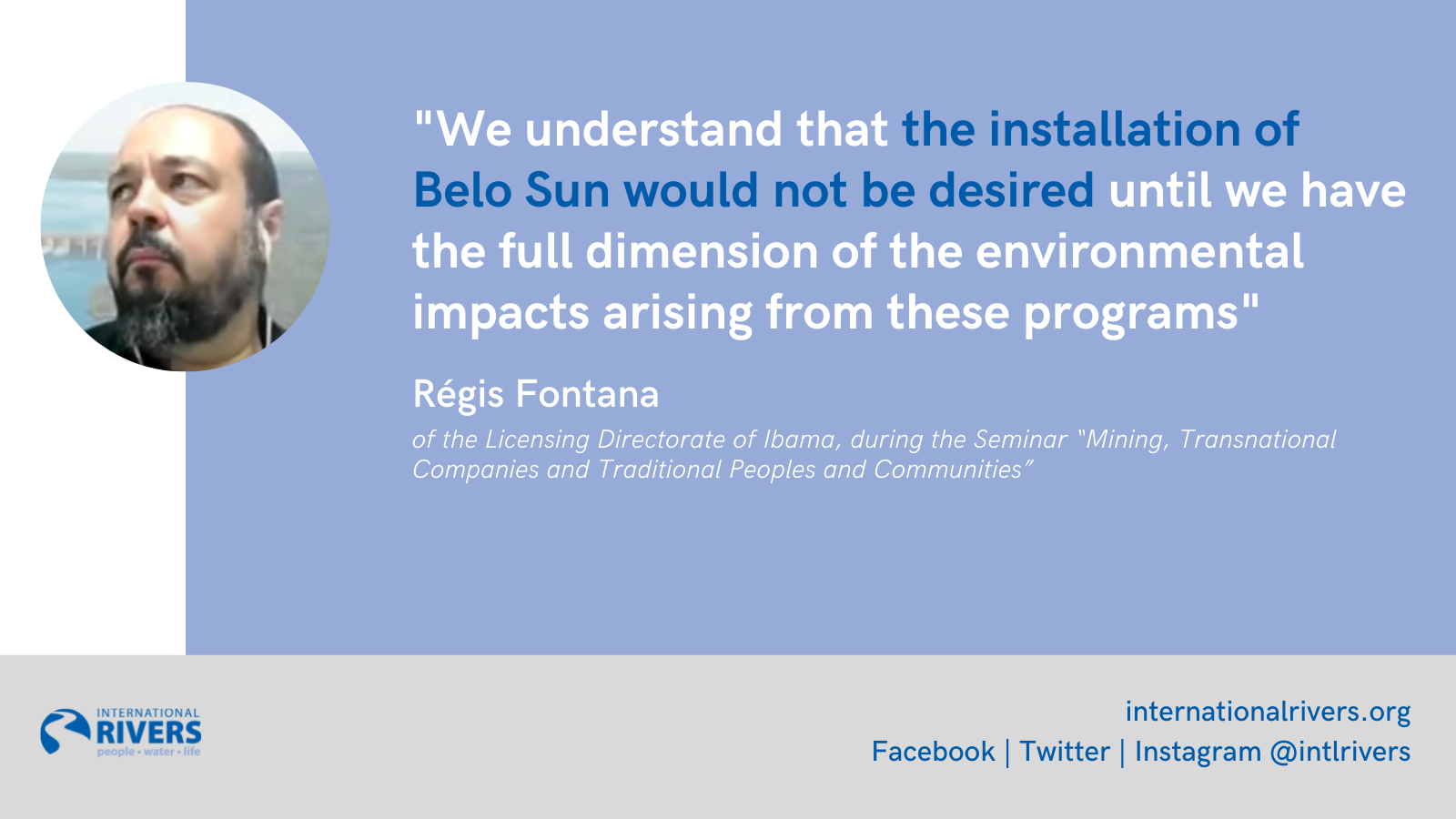 Professor Ingo Wahnfried, from the Federal University of Amazonas, warned that Belo Sun will reach volumes of 35 million m³ of tailings material (mine waste). For comparison purposes, two of the biggest tailings dam’s failures in the country almost reached this number: VALE, in the case of Brumadinho, released around 12 million m³ of tailings, and Samarco, in Mariana, disposed of 43 million m³ in the Doce River.

“Any failure in the hydraulic containment systems will dump tailings into the Xingu River,” Wahnfried said. “The contamination of soil and water can occur very slowly. The Belo Sun project should last between 12 and 17 years, but after that, all this environmental contamination will remain there”, explained the researcher who reinforced the need for autonomous studies on the spot, not just contracted ones by the Belo Sun enterprise. 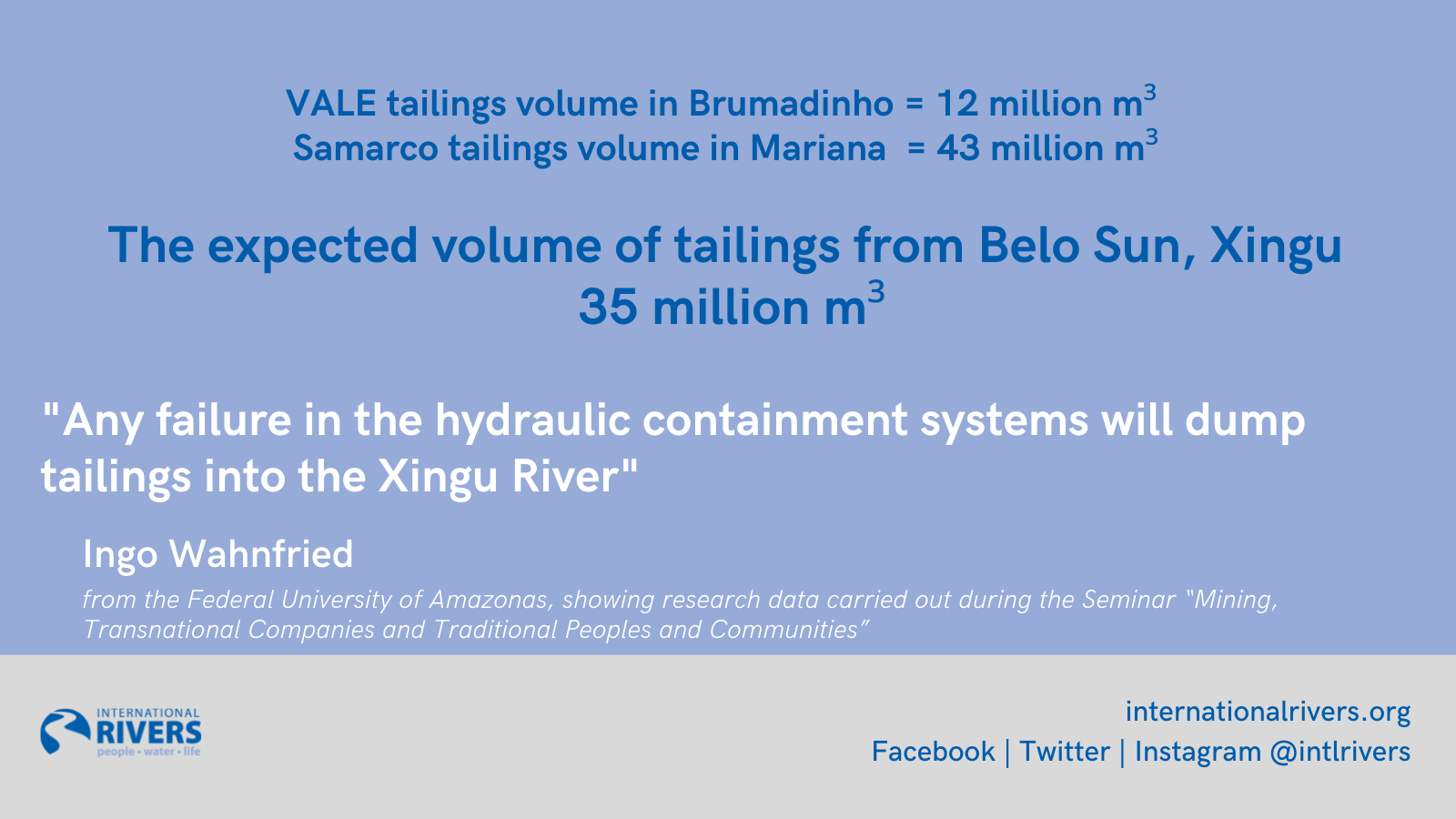 Finalizing the first table of the event, Professor Steven H. Emerman, mining specialist, explained more details about the operation of Belo Sun. Emerman said that if implemented, Belo Sun will process 3.5 million tons of ore per year. But, as the ore contains only 1.47 grams of gold for each ton of ores, “most of the ore will be converted into tailings, stored permanently in a dam”. The professor presented a study showing that Brazil suffered 15 failures in tailings dams between 1986 and 2019, and that the failures increased exponentially, three of them only in 2019. The professor ended his speech by warning that  the Volta Grande mining project maximizes the water stored in the tailings dam, “the opposite of guidelines from the mining sector,” which has been seeking to reduce the water stored in tailings reservoirs in order to reduce the likelihood and consequences of dam failure. In the event of a rupture, the minimum tailings flood speed will reach 20 kilometers per hour. With this speed, the flood of tailings will reach the Xingu River in seven minutes.

The responsibility of transnational companies

On the second day of the event, Professor Cristina Therezo, from the Amazon Human Rights Clinic, spoke about the operations of transnational companies in the Southern hemisphere by which the State transfers its resource extraction role to private companies, a practice that started in the 80’s.

“This transfer of role generates a very important discussion about the absence of internal measures of the States for control, in an equal way, with due diligence. Unfortunately, this scenario is delicate, and often inoperative, and it brings a very negative scenario, especially with the theme of human rights.”, explained Therezo. 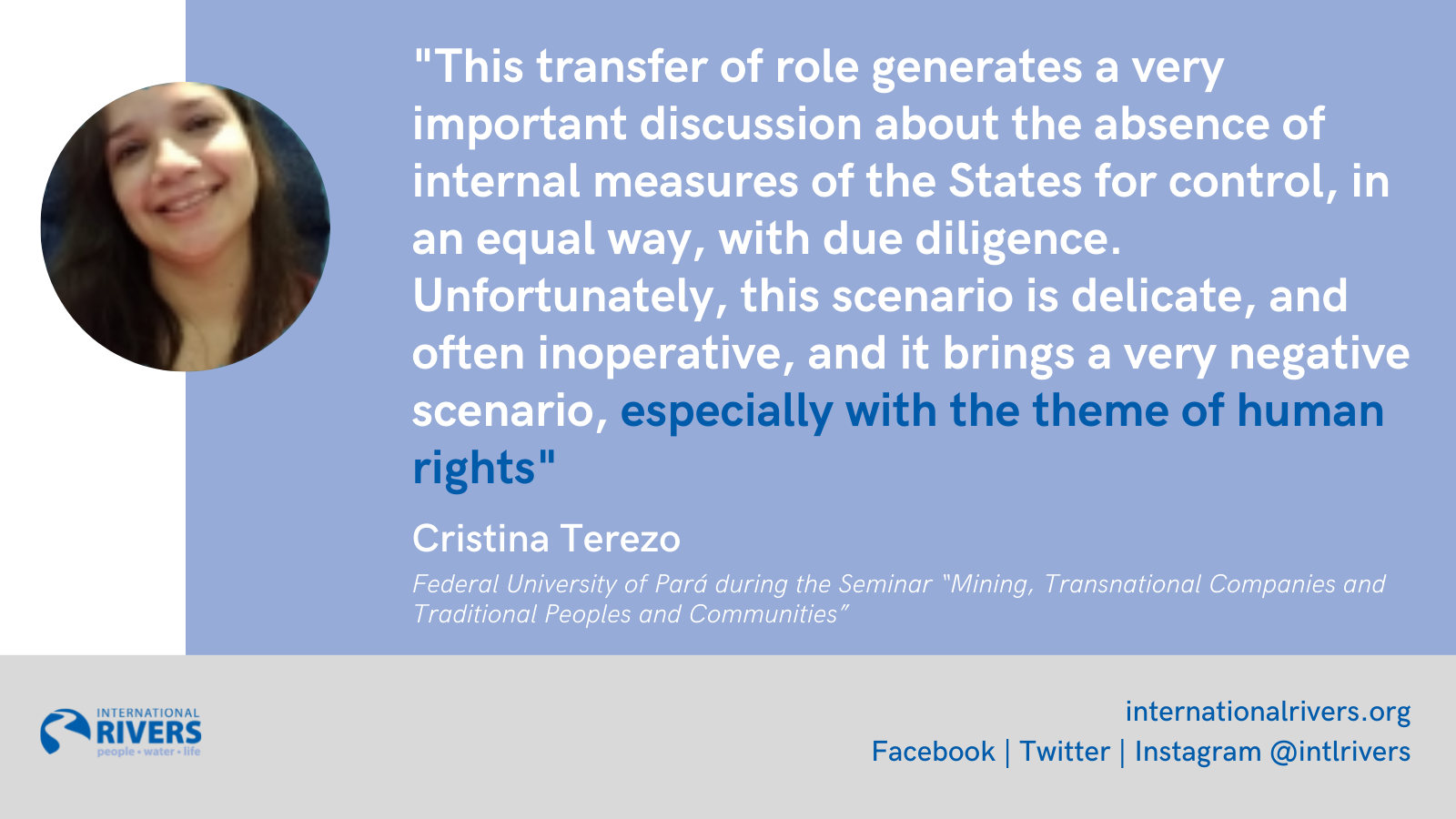 At the panel that discussed international policies, the professor also spoke about the work carried out by the United Nations to seek accountability of transnational companies with international standards and supervision.

Speaking about the essential international parameters, Thayná Lemos (AIDA), presented the importance of the Environmental Impact Assessment (EIA) in environmental governance and reinforced that public participation should take place before the impact analysis and not after the licensing process is already at the final decision stage.

“In the case of Belo Sun, and in most licensing processes, the population is only notified of a formal project after the impact analysis. (…) In Belo Sun there was no prior consultation (…) This is so serious that the project should be reformulated and presented again. This practice of “fixing” the licensing process in Brazil should not happen.”, says Lemos. 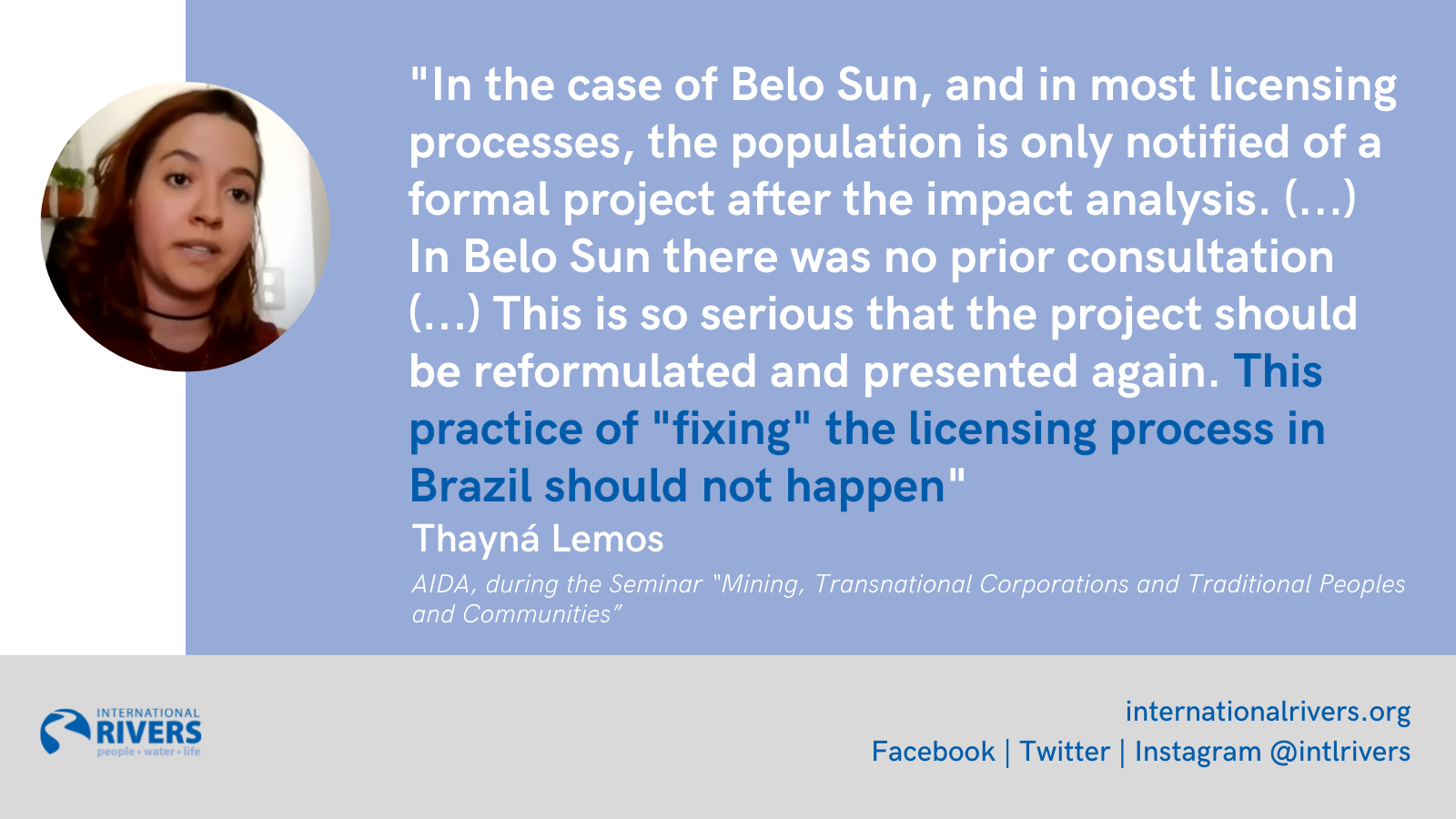 “Delayed justice is not justice”

Facilitated by Elis Araújo, from International Rivers, the event was concluded by a roundtable on the ongoing lawsuits against the Belo Sun mining project. The public defender Bia Albuquerque spoke of three legal actions currently underway against the company. Albuquerque discussed some of the illegalities committed by Belo Sun, such as the illegal purchase of public lands and the threat of forced eviction of traditional communities.

Verena Glass (Xingu Vivo para Sempre Movement, Brazil) spoke about the use of legal instruments against the community and repression of local leaders. The panel also included Herena de Melo, from the Public Ministry of Pará, Thais Santi (Federal Public Ministry), Elisângela Machado Côrtes (DPU, Brazil) and the judge of the Court of Justice of Pará and agrarian ombudsman, Mairton Carneiro, who reinforced the importance of the agility of the Court of Justice to resolve these issues: “The authorities are not taking the necessary steps at the right time. Rui Barbosa already said that delayed justice is not justice”. 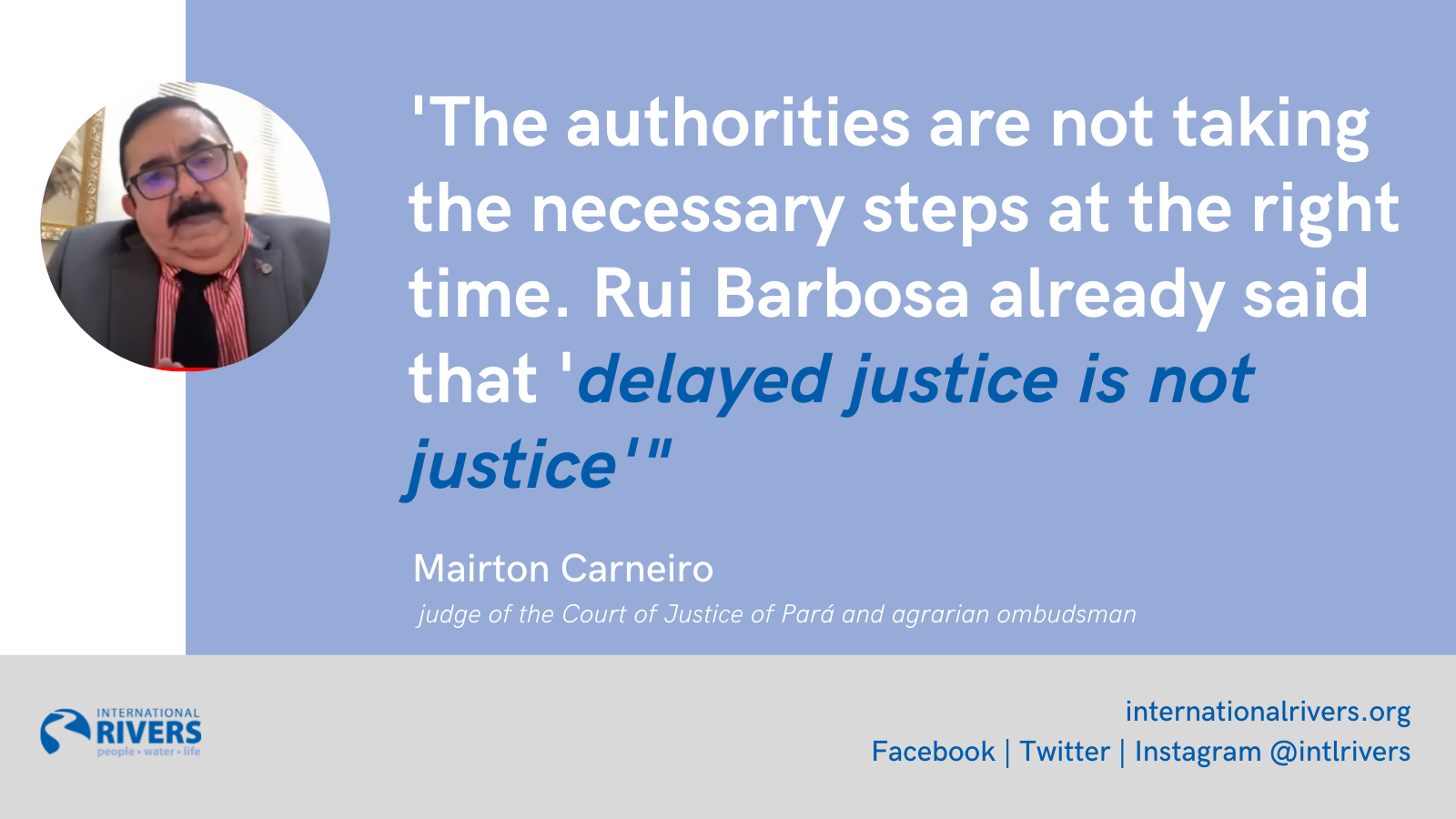