The Salween River (also known as the Nu and Thanlwin) is the longest undammed river in mainland Southeast Asia. From its headwaters in Tibet to its estuary in Myanmar, it remains wild and relatively untouched, flowing through remote and pristine areas, including China’s Three Parallel Rivers UNESCO World Heritage Site. It supports the livelihoods of over 10 million people, sustaining the rich fisheries and fertile farmland central to the lives of indigenous and ethnic minority communities living along its banks.

Unfortunately, the river has faced a series of destructive proposed dams for years, including the Kunlong, Naungpha, Mongton, Ywathit and Hatgyi hydropower projects. Many of these projects are located in areas of past and ongoing armed conflict, and people living in and around the proposed dam sites have endured militarization and human rights abuses.

Ethnic minority groups have been systematically and forcibly moved from their homes, and also robbed, tortured, raped or executed. At the Mongton dam site area alone, over 60,000 people have been forcibly relocated due to armed conflict.

The Strength of the Movement

Yet despite ongoing threats, a thriving river protection movement has arisen. Myanmar has been unable to construct the proposed dams thanks in part to community resistance. In 2016, China’s Yunnan government decided to stop all dam construction in the Nu Valley. These are huge wins for the communities and environmentalists who had fought the planned dams for over a decade.

The Salween has a fraught history of conflict and struggles for ongoing self-determination. But still it remains an astonishingly pristine river, a river marked by hope, inspiring a thriving movement of local communities and their allies campaigning successfully across borders to oppose destructive projects and keep the river free-flowing.

Powering Conflict: An Analysis of Business and Human Rights Responsibilities in the Salween Basin (2020) 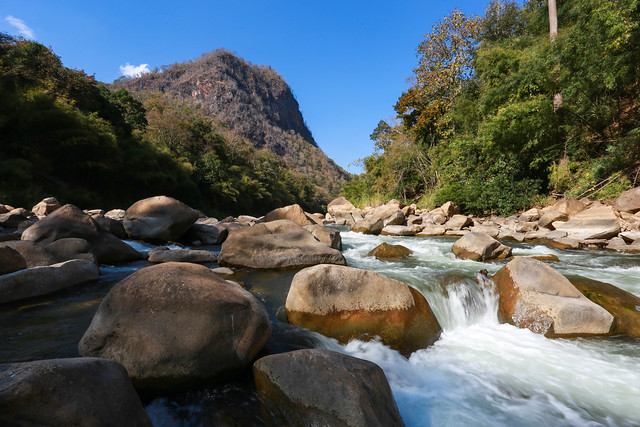 A photo journal of the Salween River including the Karen State (along the border between Thailand and Myanmar) to the remote corner of the Yuam River, a tributary of the Salween River in Mae Hong Son Province documenting sections of this iconic river and the communities and livelihoods at risk due to proposed hydropower projects and water diversions. Photos by: Wichai Juntavaro