The history of dams is riddled with tragic stories of displacement and blatant disregard for Indigenous groups, and the Jumma Peoples are no exception to that. Under the direction of United States and Pakistani government officials, the Kaptai Dam was built in present-day Southeast Bangladesh and completed in the early 1960s, marking a tragic moment in the histories of many Indigenous groups. The reservoir that was created because of the dam had submerged a vast area of cultivable land with rich biodiversity; bringing in devastating consequences: loss of livelihoods for both the Jumma Peoples and downstream communities, destruction of cultural and historical sites, and the displacement of over 100,000 Indigenous Peoples. Since the Kaptai Dam was built, the developers of the project have failed to acknowledge and remediate the consequences of the dam, leaving the Jumma people marginalized in their fight for justice for almost 60 years.

A recurring theme of the pursuit of hydroelectric power over the past several decades is destruction of the environment and cultural heritage, with Indigenous groups becoming collateral damage. It is essential to tell the stories of those who were disenfranchised by dams, such as the Jumma Peoples with the Kaptai Dam, in order to bring awareness to the situation, push for recognition and justice and prevent future harmful projects from happening.

The Jummas and the Chittagong Hill Tracts

The Chittagong Hill Tracts (CHT) falls in the southeastern part of Bangladesh, sharing international borders with Myanmar to the South and South East and India to the north and northeast. According to the 1991 Census, its population was  974,447. The CHT is home to 11 indigenous communities that collectively identify themselves as the Jumma Peoples:  Chakma, Marma, Tripura, Tanchangya, Murung, Lushai, Khumi, Chak, Khyang, Bawm, and Pankhua.  The Jumma Peoples population of CHT has shifted dramatically since 1941, whereby the Indigenous population was 98.5% to 52.90% in 2011 as opposed to the Bengali/Muslim/Hindu Population which was 1.5% in 1941 and 47.10% in 2011. This was due to the islamisation policy of the Bangladesh government to the CHT region which can be traced back to India’s independence from British Rule in 1947. Second, right after Bangladesh gained independence from Pakistan in 1971, the Chakmas organised to fight for the rights of indigenous groups living in the hills. In 1972, the Shanti Bahini was formed to gain autonomy for the Chakmas through an armed struggle. Over the decades, waves of violence by the Bangladesh Army would send Chakmas across the border, seeking refuge in India. 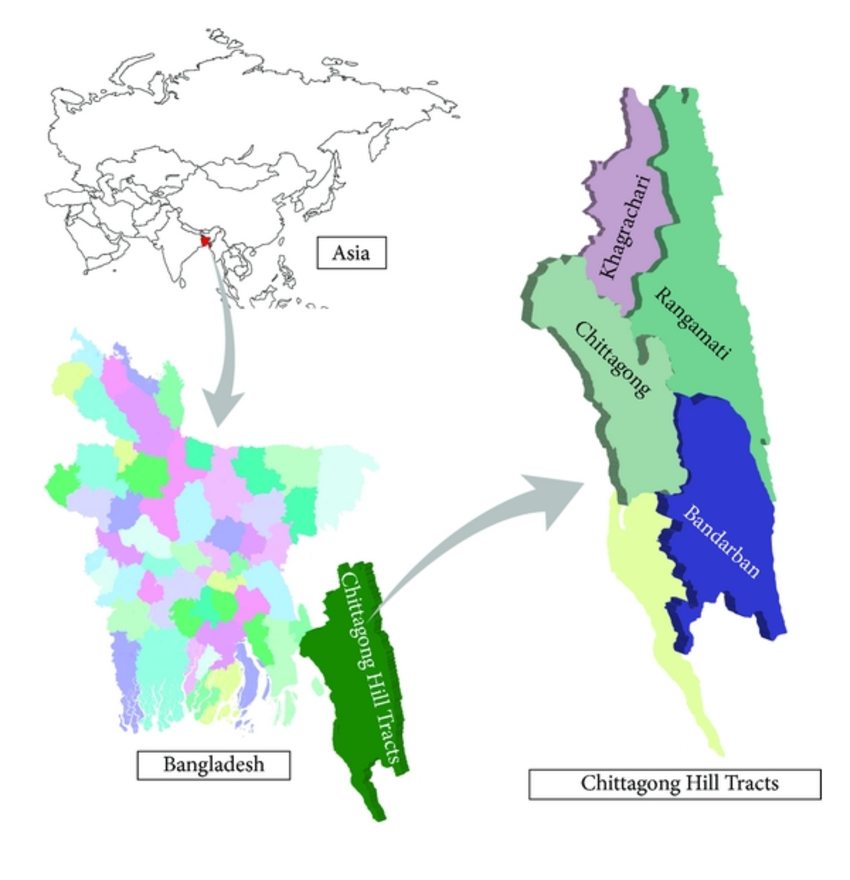 The demographic shift in the Jumma Peoples population and the conflict in the CHT  was further exacerbated by the construction of the Kaptai Dam built on the Karnaphuli River; where a staggering 100,000 Jumma Peoples, 70% of which were Chakma, were displaced from their ancestral homelands.

The Kaptai Dam and the Bara Parang (The Great Exodus)

The Kaptai Dam was built by the Pakistan government (before the formation of Bangladesh) and financed by the United States government through USAID. The construction began in 1957 and was completed in about 6 years. About 666 meters long and 43 meters high, the dam was built on the Karnaphuli river in the heart of the Jumma Peoples’ land. Currently, the Kaptai Dam is the only hydropower source in Bangladesh, producing about 5% of the country’s electricity with an installed capacity of about 239 megawatts. While others reap the benefits of this destructive development project, the Jumma Peoples, who did not give consent to the project’s construction on their ancestral land, have experienced nothing but loss.

The construction of the Kaptai Dam permanently displaced nearly 25% of the region’s population, resulting in what has been called by some as the “permanent disintegration” of the Jumma Peoples: 18,000 homes and 1,306 square kilometers of land were submerged in water. Following the advice of officials, displaced peoples were resettled in the low-lying areas of Langdu, Barkal, and Bhaghaichari during the early stages of development. As the Kaptai reservoir filled up, resettlement sites were also soon to be underwater, displacing refugees for a second time. Between 1966-65, around 40,000 Jummas left the country by foot to the northeast India states of Tripura, Assam, and Arunachal Pradesh. Another 20,000 may have gone to Burma while others stayed in hopes of receiving compensation promised by the government, a promise that was never delivered upon. Nearly all the physical remnants of Chakma culture, including Buddhist temples, receded beneath the water.

The dam has come to symbolize the active disenfranchisement of the Jumma Peoples by the government of Bangladesh, which led to a violent armed conflict between the government and Jumma Peoples of the CHT that erupted in the mid-1970s and lasted for 22 years. A peace treaty was signed in 1997, but tensions remain as Jumma Peoples of the region continue to experience land dispossession, a lack of sovereignty, and a lack of religious and cultural acceptance. An article from 1987 documented that 45,000 Chakma refugees entered the state of Tripura in India, bringing with them stories of horror: women being raped, houses burnt, and people shot and hacked to death.

The haunting displacement of the Jumma Peoples from their land is referred to by the Chakma people as the Bara Parang or the Great Exodus. They were given relief camps in India constructed in the “vacant lands” of Tirap, Lohit, and Subansiri districts of the erstwhile North-East Frontier Agency (NEFA), a political division governed by the Union government. In 1972, NEFA was renamed Arunachal Pradesh (AP) and made a Union Territory, and subsequently, it attained statehood. The locals and regional political parties opposed resettling refugees in their land fearing that it may change the demography of the state and that they may have to share their already limited resources. Since AP became a state, there were systematic attempts by AP to drive out the Kaptai displaced people settled in AP despite the Indian Supreme Court directives against the drive.

The devastation of the Kaptai Dam extends well beyond anything project developers could quantify in their impact reports; the dam resulted in an irreparable loss of ancestral homes, culture, and livelihoods. 125 Mauzas (districts), major portions of the town of Rangamati, and the Chakma Royal Palace currently lie under the dam’s 655 square kilometre artificial lake. The dam was a direct attack on the well-established societies of the Jumma Peoples.

Previous to the Kaptai Dam, the Jumma Peoples moved from hill to hill, practicing jhum cultivation on a cycle of 7-10 years. With the dam’s construction, the agriculture-based economy of the CHT was upended. 40% of fertile land was inundated by the dam, and the cycle of jhum cultivation was reduced to 3-5 years. A shortened cycle meant increased pressure on the remaining land, which eroded the soil. River valleys previously filled with an abundance of paddy fields and vegetable gardens were flooded, disrupting the agriculture and horticulture practices that Indigenous Peoples relied on to sustain themselves.

The construction of the Kaptai Dam also resulted in stark losses of biodiversity in the CHT. With Indigenous Peoples comprising less than 5% of the world’s population but protecting 80% of global biodiversity, it is inevitable that threats to Indigenous Peoples will result in a loss of biodiversity. In the CHT, rich vegetation and large areas of forest were flooded. Bison, sambur, barking deer, elephants, and panthers that used to roam the hills are nowhere to be found. Less than 40 years after the construction of the dam, the Royal Bengal Tiger became totally extinct from the region. The Shushuk, also known as the South Asian River Dolphin, has also become endangered to the area. Although it has been spotted in the Kaptai reservoir, which has since been degrading and gathering silt, it has not been observed in recent years. The CHT has become largely devoid of any wildlife.

The Chakmas in AP are now caught between competing versions of identity politics emanating within the region. Meanwhile, thousands of Chakmas in AP still live in miserable conditions without land rights, ration cards, access to schools after the primary level, and jobs. The imperious policies of the center and the identity politics of the state have extracted a terrible human cost. All these conflicts can be traced back to the Kaptai Dam. India’s supreme court directed New Delhi to give citizenship to the Chakmas in 2015, but so far, this has not been implemented due to protest and opposition from other ethnic communities from the state.

The Same Old Dam Story: A Disregard for Human Life and the Planet

Despite the unfathomable harm the Kaptai Dam has done to the people and ecosystems of the CHT, 60 years later there has been a despicable lack of accountability, acknowledgment, or reparations from the Pakistani government, the United States government, and any other project developers. This story of hydropower’s displacement and destruction in the name of profit is one that has played out all over the world, from Laos to Colombia to Ethiopia. By the year 2000, dams had already displaced up to 80 million people globally.

Nearly 60 years after their original displacement, the Jumma Peoples remain victimized by hydropower, with developers and government officials taking little to no action to remediate the issue. Indigenous peoples are too often marginalized by dams and other destructive extractive projects and blatantly disregarded in the planning of projects, which is doubly destructive as neglect toward environmental stewards results in biodiversity loss and further environmental harm. Dams represent a false solution and will only distract us from making true progress in addressing the climate crisis. As more of the world slowly begins to wake up to the risks of hydropower, it is our collective responsibility to recognize the harms of past projects like the Kaptai Dam, which continue to the present day, and to prevent cycles of destruction from continuing with future projects.